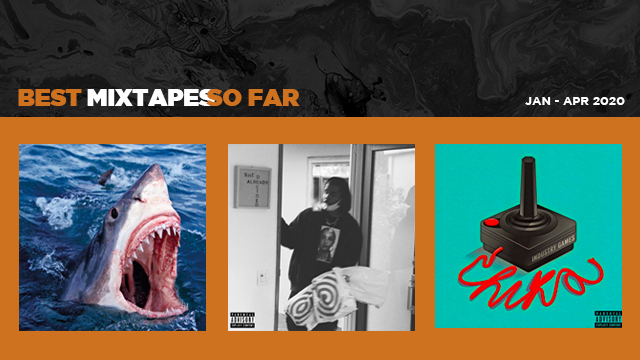 In 2020, with so much uncertainty in the world, music fans are in search of a simpler time. Nothing brings back early 2000’s nostalgia like the idea of mixtapes. In April, Smino dropped an amazing tape onto SoundCloud reminding listeners that mixtapes still exist.

The distinction between albums, mixtapes and EPs seems to get blurred more and with each year that passes. Some artists claim they released a mixtape despite it being a studio LP and others will label a 15-track project an EP. Simply put, there’s not much rhyme or reason anymore.

But whether it’s just a label or artists releasing mixtapes and EPs in the traditional sense, plenty of these projects are still being delivered despite the ambiguity. HipHopDX has complied the best of the best in an effort to help fans keep track of what’s dropped in 2020. You can also check out our album lists below:

[Albums released between April 22 – 30 will be included in next month’s updates]. On Already Decided, Smino switches effortlessly between smooth, melodic flows and straight bars over soul samples. The St. Louis-bred MC displays his versatility, rapping over beats of all kinds, and the 16-track tape includes features from the likes of Sevyn Streeter and T-Pain. One of the standout songs is “Blac Soda (Freestyle),” which sees Smino flowing over Baby Keem’s cult classic “ORANGE SODA” instrumental. This feels like a warmup before his next official album. Viral Instagram star-turned-professional rapper Chika released her debut project Industry Games after years of grinding. Her goal — to “make you think” — is fully realized throughout the seven-track effort. Backed by a handful of bass heavy beats, the 23-year-old Alabama native addresses her hustle, weight issues and haters with the expertise of any seasoned MC. Conway The Machine and Alchemist are no strangers, having worked on multiple songs together over the past few years. But the two finally linked up for a collaborative project titled LULU, which has become the clear frontrunner for best EP of 2020. Conway’s vicious yet meticulous bars perfectly complement Alchemist’s often chilling sounds, resulting in a seven-track effort with lots of replay value. And while the EP’s briefness is part of the appeal, the duo’s chemistry makes one hopeful they’ll concoct a full-length project in the future. Denzel Curry surprised fans with the 13LOOD 1N + 13LOOD OUT MIXX, giving listeners a brief but potent set of music that recaptured the feeling of old school mixtapes with its grainy quality and stitched together songs. The album received a score of 4 out of 5 from DX, with contributor Josh Svetz writing, “Curry’s latest release pays homage to his roots, while also showing off Zel at his most anarchic. It’s the blueprint for how to release scattered singles and snippets, without a cohesive idea or concept to tie it all together.” Although Mick Jenkins referred to the EP as a prelude to his next full length project, The Circus can easily stand on its own as a body of work. From moody instrumentals to memorable lyricism, the seven tracks perfectly showcase the MC’s skills. The album received a score of 3.7 out of 5 from DX, with contributor Josh Svetz writing, “He employs a head-bopping flow with a throwback 90s boom-bap flair, making his verses pop. The Circus is an overall creative win and a nice precursor for his next album.” The Chef hit the Red Bull Studios in New York and cooked up a brief three-track offering that proved his pen game remains sharp, making it clear the Wu-Tang Clan MC still is a force to be reckoned with at 50 years old.

Below is a list of more projects that we loved and still have on repeat.

Check out the best mixtapes and EPs from each month: