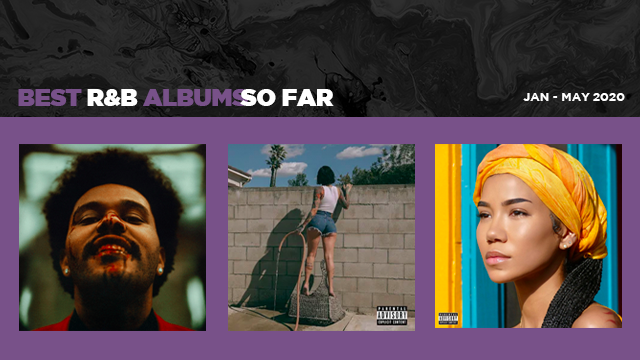 Even though the past couple of months have felt like multiple years, it’s only June. Amidst all of the chaos that persists in the world, some soothing R&B music is much needed. Throughout the year listeners have been provided with just the remedy, including new music from Kehlani in May.

New R&B albums flood streaming services every week, so HipHopDX has narrowed them down to the essentials, providing readers with a list of the must-listen projects. This article is part of DX’s monthly “Best of The Year” series. Check out some of DX’s other lists to stay up-to-date with all of the new music dropping this year.

It Was Good Until It Wasn’t – Kehlani Kehlani stays true to her R&B roots on her sophomore effort, It Was Good Until It Wasn’t. Pivoting from the pop-heavy sound on her 2016 debut album Sweet Sexy Savage, IWGUIW shows the maturation of the now 25-year-old singer and tells a story of the ups and downs of her journey through motherhood, love, her career and just life in general. With 15 tracks, features include Tory Lanez, Jhene Aiko, James Blake, Masego and Lucky Daye, as well as an outro dedicated to and featur

It Is What It Is – Thundercat The Los Angeles-bred bass impresario returned at the top of the month with another jazz-funk-R&B-soul hybrid, full of impressive guest features from The Internet’s Steve Lacy, Slave icon Steve Arrington, Ty Dolla $ign, Lil B and more. The most touching moment comes on “Fair Chance,” his heartfelt tribute to the late Mac Miller.

A Muse In Her Feelings – dvsn The talented Toronto duo returned with a new album to satisfy the craving of their dedicated fan base, who had been waiting since October 2017 for a new project. Throughout the first half of the album, dvsn stayed true to the sound that gained them prominence, but the second half of the album sees the OVO signees experiment with new sounds, melodies and rhythms. The experimentation paid off as dvsn provides a complete body of work with features that compliment them sonically throughout the 16-track album. Following the release of Jhené Aiko’s “Triggered (freestyle)” and “P*$$Y Fairy” singles, expectations were high for her first official project since 2017. Throughout the 20 tracks on Chilombo, Jhené explores themes heartbreak, loss and acceptance. With contributions from Big Sean, Nas, Ab-Soul, Ty Dolla $ign, Future, Miguel, Dr. Chill and John Legend, the album has no shortage of star power and each feature provides something unique to the album.

After Hours – The Weeknd Four years after releasing his massively successful Starboy album, The Weeknd returned with a brand new look and sound for After Hours. The LP is a less pop-heavy and more introspective affair taking listeners into Abel’s world of heartbreak, loss and realization. And if the project’s 14 tracks weren’t enough, Weeknd kept fans on high alert with an ever-expanding deluxe edition of the album that added new chapters and remixes to his Billboard 200 chart-topping LP.

070 Shake‘s Modus Vivendi is R&B plus more. It’s an album that certainly deserves a slot on any “Best Of The Year” list so far. The album is genre-bending, unique and includes a bevy of standout songs. Upon its release, Modus Vivendi received a DX review score of 4 out of 5 and was described as a “Mantovani-style soundscape heard in a sensory deprivation salt tank.”

Below is a list of more albums that we loved and still have on repeat. Check back so that you don’t miss the best albums of 2020!

You can also check out the best albums from each specific month: