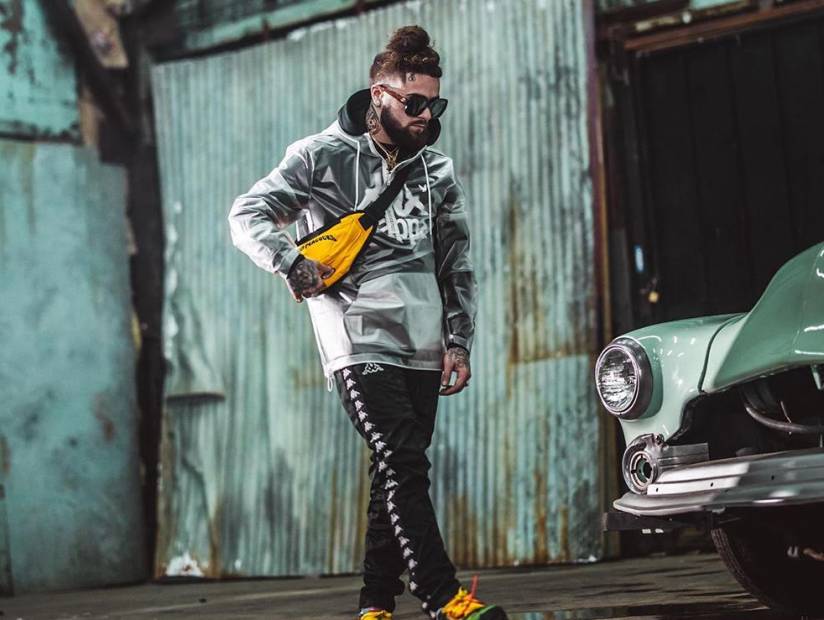 Los Angeles, CA – Few artists come into the Hip Hop game with a sense of musical maturity but Doobie stands as one of the real ones.

His new project Faithfully Faded finds the Ohio native eagerly playing in a macabre sandbox; embracing the darkness around him.

However, don’t get it twisted like one of his joints. Doobie is a very social, highly functioning artist who loves to rap, his fans and get stoned — in no particular order.

During his chat with HipHopDX, he was able to clear the air on the source of his artistry.

HipHopDX: Congratulations on everything. I listened to the album. You got the midwest melody popping off, so good job there.

HipHopDX: I feel like you have an underlying, vampire alter ego, but not like a vampire in the blood-sucking sense. Who would you say, Doobie represents?

Doobie: “Doobie” is just a way that I can show people who I am really am, for them to understand me, and basically I’m just, I don’t know. I’m kind of a different type of person, very intricate, very weird. And I like darker things.

But at the same time, I’m not an evil person, at all.

I’m an outspoken person, I just love to make good music, for real. So Doobie is just someone that I can show you who I really am, that you will get it, without me just being a regular person, just walking on the street.

HipHopDX: So, you know, when you say “being drawn to the dark side of things”, did that get you into trouble growing up, at all?

Doobie: No, I mean, sometimes, yeah. But not anything that I necessarily didn’t ask for. So it’s like, you know, it just is what it is.

HipHopDX: Well I watched the “Hate Song” video. That’s definitely as dark as it gets.

What was the passion behind writing that song? You know, was it just emotion that you got from other people? Or was there like an actual breakup that made you just go insane?

And basically I want to portray like if that actually happened. Like what if you actually snapped one day, and killed your significant other, or whatever? What would happen, you know, I wanted to make a song that was the complete opposite of I love you. I wanted it to like I hate you, and that’s why I love you, type situation. Because you know how people love what it’s good, a lot, you know. Or isn’t necessarily the best for them.

HipHopDX: That makes sense. I can see how you took a spin over there.

Tell me about where you’re from in Ohio. How does Doobie see the world? Is it a good place, is it a place where dark stuff happens? What’s your outlook?

Doobie: I feel like, overall, the world’s a beautiful place. But at the same time, you know, it has its downfalls too. But that’s just anything in life. I feel like the world is a crazy place. You can get lost in it. And that’s a good thing or a bad thing. But ultimately, I don’t know, I enjoy being here. And seeing where my life takes me. The world is crazy. It’s crazy.

It’s dope though. So much going on in the world, especially coming from Columbus. It’s big, but it’s small, at the same time. Compared to like Hollywood, Hollywood is crazy, but it’s everything. Like I love living out here, to be honest with you.

You know, everything’s out here, so it’s of more where I need to be.

HipHopDX: I think I can relate.

Doobie: Yeah, for sure. Yeah, you’re from Columbus, right?

Doobie: Yeah. So, you know.

HipHopDX: Hands down. I got another Ohio question for you. Who’s your favorite Bone member? I see you was rocking their shirts.

HipHopDX: So would you say everybody from the midwest tried to rap fast, but there’s only a select few. I see you creeping up in that lane being able to spit it with clarity. Would you say Bizzy helped influence your style?

Doobie: Not like a big influence, but definitely, yeah. Like Bizzy, I always fuck with Bizzy, like always. It’s funny because me and Lil Bizzy are good friends, too.

Doobie: He sounds just like his father. It’s insane.

HipHopDX: You’re about to hit the road and everything. What can people expect from a Doobie show? There’s a million rappers these days. There’s a show every night. What separates your set from the rest?