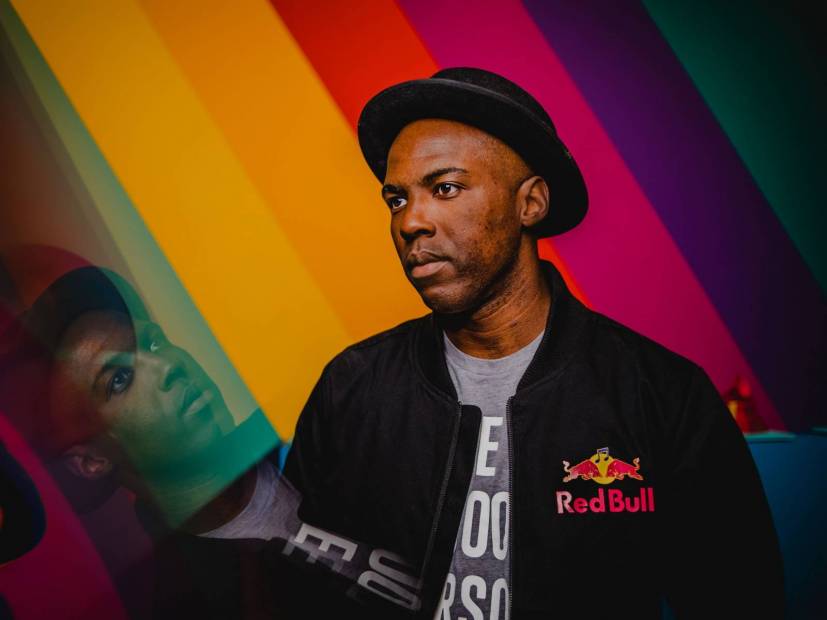 Denver, CO – Walking into the RedLine Contemporary Art Center in Denver, Colorado, the energy is electric.

In the middle of a crowded room stands Thomas “Detour” Evans, visual artist extraordinaire. He’s pointing to his expansive works displayed throughout the building and explaining where the idea for The 5 Pointers band came from, the focal point of Detour’s exhibition with his partner Red Bull.

The year is 2119 and The 5 Pointers have already established themselves as a successful, Afrofuturism group. Detour’s work is based on a museum dedicated to them. He meticulously created an entire fictional world that includes an issue of Time Magazine with The 5 Pointers on the cover, makeshift Grammy Awards, a $25 Denver Times newspaper (which he wrote and handed out at the event) and several, futuristic instruments that gallery visitors are allowed to play.

To bring his creation to life, Detour had the seemingly impossible task of imagining what music would sound like in the future using a synthesizer, harp, wall harp and hand drums, something he appeared to pull off with ease. During live performances, several Denver musicians would weave their own musical masterpieces using the instruments Detour helped create.

In fact, the Denver musicians Detour used to perform as The 5 Pointers even wrote a song for the project called “Transcending” that is intended to illustrate what music would sound like 100 years from now.

This is just the latest artistic venture in Detour’s colorful career.

During an interview with HipHopDX, Detour spoke about almost deleting an email from Netflix that he mistakenly thought was spam. That email turned out to be a very serious offer from from the massive media company. Netflix wanted Detour to paint portraits of JAY-Z and David Letterman for the illustrious talk show host’s new endeavor, My Next Guest with David Letterman.

“I got the email and it said, ‘Netflix Opportunity’ in the subject line,” he tells DX. “I thought it was like an internship type of thing. I was like, ‘Oh I don’t want to be an intern.’ But I open it up, and it’s like a real actual paragraph, short paragraph. I’m like, ‘Oh O.K. This is actually real.’

“So I read it, they wanted me to do a painting of David Letterman and JAY-Z and record myself doing it. Then they’d use that for the marketing graphic stuff for that episode.”

At this point, Detour was in France staying in a picturesque castle with several other artists, working on more of his interactive installations. The only catch was Netflix wanted the paintings done quickly.

“Everything was basically on the fly and it was good because it was nice weather and sunshine and great lighting. They came out really good and I basically sent them the footage. They took it from there.”

Detour’s work is currently showing at the RedLine until Sunday (January 5).