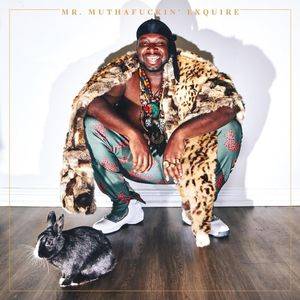 It’s been a long time since a Hip Hop artist from New York has taken center stage, but if you believe Mr. Muthafuckin’ eXquire’s bold proclamations on his eponymous album, he’s more than ready for his close-up, Mr. DeMille.

We all first heard his name when “Huzzah!” a track produced by horrorcore fave Necro, made him a viral sensation all the way back in 2011. And even though an all-star remix of the viral track propelled him to a Universal Records contract, Mr. Muthafuckin’ eXquire was bound to be stifled by the constraints of a major label. (How, really, do you market someone like him?) Universal releasing him was, ultimately, a blessing in disguise, because his latest album — released on his own Chocolate Rabbit label — brings him back to Earth (i.e., his New York roots).

The man born Hugh Anthony Allison made much ado about the fact that his major label success translated into branding him, incorrectly, as a “party rapper” (and, in his words, he ain’t even fucked Rihanna). And on the album’s opener, “FCK BOY!” he quickly puts the cliche to rest as he throws down the gauntlet for everyone from R. Kelly to President Trump, and throwing every designer whose atelier is in the 4th arrondissement in the mix for good measure: “R. Kelly can rot in hell, but his music too good to mute/Oops!/Telling me no more ‘Ignition’ while I’m dancing/But then I’m ‘posed to stand for the fucking national anthem?/Fuck Prada, Burberry, fuck Louis Vuitton too/They ain’t do nothing racist but that’s just in case they do.”

As his name indicates, Mr. Muthafuckin’ eXquire is profane and unashamed. “Fuck” is peppered liberally throughout the album, but it’s always used to buttress razor-sharp political commentary (even Abbie Hoffman, one of the infamous Chicago Seven and founder of the Yippie counter-culture movement, gets name-checked on “Nosediiive,” a scathing indictment of late capitalism in the US of A), not just said for shock value.

But that doesn’t mean he doesn’t know how to have a good time. To the contrary: on “I Love Hoes,” he lets his freak flag fly with lyrics that are more than a slight nod & wink to the late, great ODB when he says, “I like prostitutin’ hoes/Give them $50, they suck cock/Bougie hoes that do that same shit for publicity/Even made a private IG so that I could follow hoes.” Even a woke dude needs his knob slobbed, and bless eXquire’s heart, he has an equal opportunity dick available for your entertainment.

One of the cool things about Hip Hop, especially in the late 1980s and early 1990s, was that it defied expectations and genres. While the 21st century is starting to see the emergence of artists that are both boundary-crossing & genre-defying (hello, Lil Nas X), Mr. Muthafuckin’ eXquire was an artist that did it all before it was cool to do so. Left to his own devices, and free from the constraints of a major label, his eponymous album announces his arrival, once and for all — and warts and all.